Rosalind Moran is from Australia, where she studied a PhB Bachelor of Philosophy (Honours) and a Diploma of Languages (Mandarin) at the Australian National University. She was the Global Winner in the Music, Film & Theatre category in 2018.

Where do your interests lie?

Academically, I am currently interested in questions surrounding (mis)representation, gender, morality, monstrosity, and comparative literature, as well as textual adaptation and reception. I have recently been resurrecting my Portuguese as part of a research project into Brazilian literature.

Professionally, I enjoy roles that involve writing and strategic communications. I also like journalistic commissions where I am required to write about overlooked angles on topical events. I find I am strongly motivated to work and to write when I spot an oversight, a slight, or a flawed stance or policy that needs to be analysed.

As for leisure, I enjoy studying languages, wandering around outdoors, and picking out tunes on the piano. I also occasionally write satire for fun.

I am currently studying for an MPhil in European, Latin American and Comparative Literatures and Cultures at the University of Cambridge.

Since winning the award, I have expanded my freelance journalism portfolio, having now written for many of Australia’s best-known literary journals and magazines as well as a few international publications. I also spent nearly two years working as a speechwriter for the Australian Government, which led to the exciting opportunity to write regularly for the Deputy Prime Minister. My friend and I also published a book, and I was a runner-up in a major poetry prize.

Have you done something fun or weird?

I think publishing a book could come under this heading – while the experience was not weird per se, it was certainly an unusual, rewarding, and often fun project.

My friend Nancy Jin and I established a literary journal in May 2018 and spent the rest of the year working to develop its online presence. From there, we began working on what had always been two of our major goals: namely, running community events and publishing an anthology of writing and art.

Giving back to our local literary community seemed like a worthwhile investment of time and effort, especially considering so many creative communities in Australia receive minimal funding and run on the backs of volunteer labour. We had the time and energy to give back, so we did our best. In March 2020, we published These Strange Outcrops: Writing and Art from Canberra.

Yes, it has definitely helped. Receiving an award for my research was encouraging and it motivated me to pursue further study with renewed confidence. The news also came at a difficult time during my life and the lives of my parents – my mother had cancer and I was feeling uncharacteristically apathetic towards the future.

Winning an award, travelling to Dublin, and meeting so many curious and enthusiastic people at the Undergraduate Awards conference helped remind me that there were still reasons to look forward and feel optimistic.

What are your plans for the future?

Planning in 2020 feels like tempting fate. Consequently, I am currently keeping my aspirations modest. I aim to succeed in my postgraduate studies; I would also like to find work following graduation that allows me to build and expand on my existing skills and experience. Anything further would be a bonus.

How was your experience as an undergraduate student?

My experience was positive. It was stressful at times owing to my degree requiring students to maintain a High Distinction average – balancing study and extracurricular activities was sometimes challenging with such pressure to achieve always looming in the background. However, I was lucky to make good friends and learn from excellent lecturers while at the Australian National University.

During my undergraduate degree, I also had the extreme good fortune to study overseas several times, completing courses at Beijing University, Uppsala University, and the National Taiwan University. These experiences were invaluable both academically and personally.

You can reach out to Rosalind on her Linkedin. 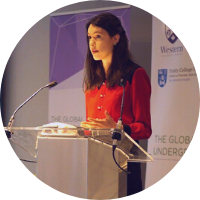 "Submitting your papers to contests like the Undergraduate Awards takes minimal effort – you’ve already written the paper, after all – and it can open unexpected doors. Why not throw your hat into the ring?﻿"