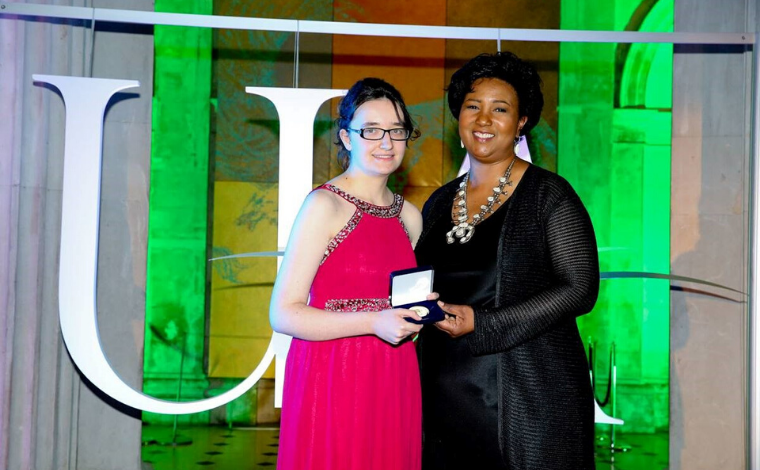 Back in 2013, I was the Global Winner of the Agricultural and Environmental Sciences Category of the Undergraduate Awards.

I was convinced the judges had made a mistake, particularly as Social Sciences are actually my specialty, as a predominantly human geographer. Yet there I was receiving a phone call to say that my paper on ice sheet behaviour during the Lateglacial Interstadial in Scotland had won from thousands of entries across 22 countries!

Before I knew it, I was getting handed my medal by Mae Jemison, the first African-American woman to go into Space! Shout out to Dr. Paul Dunlop from Geography and Environmental Sciences at Ulster University for making me enter. However, that’s the past- what’s important for this piece is the question- ‘What did I go on to do next?’. Well here it goes….

What has happened since the award?

At the time of the win, I had just finished my undergrad studies and was about to embark upon a PhD in the Israeli-Palestinian Conflict, staying at Ulster University Coleraine’s School of Geography and Environmental Sciences with my ‘uni family’ accrued during undergrad.

The Undergraduate Awards win had spurred me on in my rather Hippie-like endeavour to somehow make the world a more peaceful and happier one. My goal at that point was to be a fervent academic, publishing impactful and important research findings that would shed important light on the dynamics of conflict, resistance and peacebuilding.

An eye-opening and grounding field trip to Israel-Palestine brought me down from the clouds and onto the ground with a bang as I witnessed first-hand the harrowing realities of ethnonationalist conflict in the Middle East.
Suddenly, the academic theories seemed much less important and much less clean-lined than I had previously assumed. Four years later, I was indeed graduating successfully as Dr. Kyra Reynolds with publications under my belt, but I was much changed personally and professionally in my outlook.

As well as my fieldwork, I owe my changing perspective to my poor mental health that had been impacting me for years but reached a peak as I neared the end of my PhD. I had known all along that dedicating every minute of my waking life to academic work and grades in order to ignore these health problems was my coping mechanism and the key reason I was performing so well and winning awards and scholarships. To everyone outside – my lecturers, friends and family – I was viewed as smart and talented, but I knew the less positive root of the success.

So, when I reached that peak of collapse towards the end of my PhD, I found myself for the first time unable to concentrate, work, read, or even complete day-to-day tasks. I entered therapy which allowed me to finish my PhD and get a retail job in a clothes shop to give me time to assess how to proceed. This difficult life experience would prove vital and most illuminating to my future path.

Eventually, when I felt ready, I obtained employment in local government as an EU funded PEACE IV Project Officer at Causeway Coast and Glens Borough Council to manage 10 projects aimed at improving good relations in post-conflict Northern Ireland. Now outside of academia, I was seeing how peacebuilding efforts worked at the operational, bureaucratic level and I learnt much about the challenges and constraints placed on such initiatives. I really valued my role there but still felt somewhat disconnected from the issues on the ground.

A maternity cover lecturing position came back up at my much-loved School of Geography and Environmental Sciences at Ulster University. Knowing that getting such academic opportunities close to home was like finding hens’ teeth, I decided I needed to apply. When the originally selected applicant turned down the post and I was next in line, I decided it was meant to be and off I went back to the ivory tower with my newly gained valuable insight from beyond its walls.

Considering my personal struggles and newly gained knowledge from the local government job, I returned to academia as a much more ‘down to earth’ and ‘human’ individual. I taught my students about major world ethical issues including cybercrime, terrorism, migration, human trafficking, poverty, environmental crisis, refugee struggles and gender disparities. I made sure that the academic theories were illustrated through personal stories of people in these situations.

Afterall, I now knew that the human element mattered much more than anything else and I wanted my students to be connected to the reality of the issues we studied. I now knew that true knowledge and expertise came from those experiencing situations first-hand, not from ‘parachuted in’ academics whose lives often couldn’t be farther removed from those they aimed to understand.

I loved teaching these topics and I enjoyed teaching my students who are now doing me proud in many roles (teaching geography, doing further study in human rights law etc.). What I no longer admired though, was the politics of academia: elitism, the mentality of ‘publish or perish’ (which means leaving academia even temporarily is frowned upon), the lack of connection with situations on the ground where they were happening, the red tape paperwork that prevented any real societal impact being made, and the increasingly money-driven agenda of the education system. Anyway, maternity cover posts don’t last forever, and I found myself on the job hunt again.

What led you to your current position?

I was delighted to see that my PEACE IV job was re-advertised, and I thought – ‘Brilliant! Great timing’ – and I went about applying to get my job back. Unfortunately, when it came to interviews, my brother was in his final days of battling with terminal cancer and I mustn’t have performed too well at interview, so I didn’t get the post.

Just when I’d reached the point of almost ripping my hair out trying to write job applications, I saw an advert for a Peace Walls Development Worker at the Bogside and Brandywell Initiative community organisation in Derry/Londonderry. I thought how perfect it would be to be able to become a community worker, on the ground, with the people who need help the most and to work with people who are the true experts on all the topics I had been studying to this point. I knew not to get my hopes up because I did not have the practical experience to warrant getting such a role.

The community sector has rightly acknowledged that ‘academic knowledge’ without grassroots experience is as useful as a chocolate fireguard. Needless to say, when I was called to interview, I was terrified. I was almost embarrassed about my academic past walking into that room and felt like apologising on behalf of academia to these community workers who were much more knowledgeable of the realities than we were. Throughout the interview, I outlined what my academic skills could bring but I honestly admitted my lack of practical, on-the-ground experience and knowledge. To my surprise, a phone call a short time later informed me that I’d gotten the job!!!

When I asked them why, despite my lack of community experience, they said that I had the potential to bring a new perspective. So, that’s where I am now (since October 2019). I’m a Community Development Worker on an International Fund for Ireland Peace Walls Program trying to improve relations on a major Catholic Nationalist Republican (CNR) and Protestant Unionist Loyalist (PUL) interface area in Derry/Londonderry with the Bogside and Brandywell Initiative.

This March I was chosen by our funders to participate in the Washington-Ireland Programme’s AMBIT initiative where I went to Detroit and Washington for two weeks to learn from, and share, community work experiences with those in America who are tackling issues similar to ourselves: racism, gun-violence, sectarianism, segregation, gang culture, socio-economic disparities etc.

Finally, I get to be at the heart of the issues I used to only study and write about. On my journey here, I’ve taken all the learnings and knowledge from the academic, the statutory, and now, the community sector, and, having completed that full circle, I feel like a much more rounded, holistic and ultimately useful individual to society.

What are your plans for the future?

Finally, what about me now? - Well, I would like to be a community worker who is also an academic. Currently, academia generally doesn’t view this favourably. I hope future alumni will help me in changing this.

What role did the Undergraduate Awards play in shaping your career?

Why, I hear you ask, did I write a brutally honest, non-sparkly, non-Hollywood version of my life since Undergraduate Awards? I did so because this was the truth.

I’m sure many would like me to have said that since the Undergraduate Awards, I skyrocketed into a high-flying, big-name career with lots of money. Indeed, lots of my fellow Alumni will undoubtedly have done this, with many already well on their way in 2013. Yet, despite this, my story has much to teach us, I believe. Receiving the award gave me an underlying and enduring belief that despite the hard times, I could maybe eventually do something of note in society if I kept learning and kept trying.

What advice would you give to students?

That’s my advice to other undergrads and recent graduates: at times you will feel you’ve taken ten steps back, but these experiences might just be fundamental to getting you to where you need to be to achieve your true potential, so keep going.

Furthermore, I have learnt that if I had pursued the limelight, I would not have been able to truly have a societal impact at the grassroots level. Sometimes success doesn’t look like we expect it to and sometimes it isn’t appreciated in its true forms as much as it should be.

Submit your work to UA, it might be the motivation and confidence boost you need to start the unravelling your life path. Though, clearly, I can’t promise that it will be an easy road from there! Stay humble and grounded. Good luck!