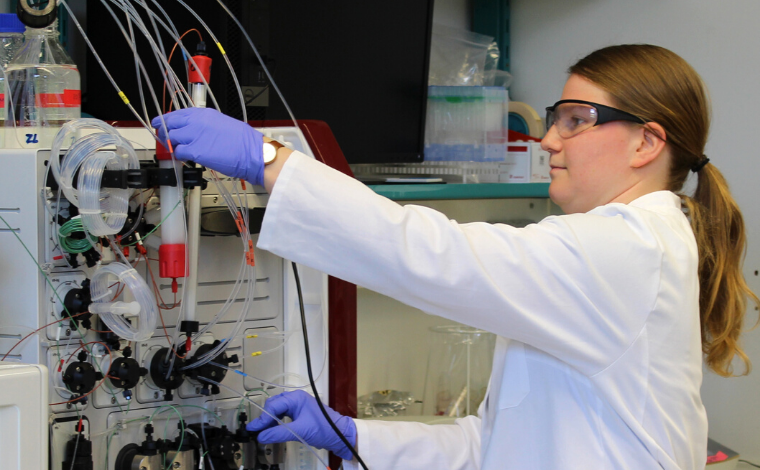 Helen was the Overall Winner in the Chemical and Pharmaceutical Sciences category in 2014.

She grew up in Sweden and when her sister went off to the UK to do an undergraduate degree she thought: “If she can do it, I can too”.

When the time came, she applied for a Chemistry degree at the University of Edinburgh.

How did you choose the institution?

Another reason why I applied to Edinburgh University was that they allowed me to incorporate a large amount of life sciences in my degree. In the first two years, my time was spent split between the Biology and Chemistry Department, before fully cracking down with Chemistry in the third year, and finally focusing on the Medicinal and Biological aspects of Chemistry in my final years.

No undergraduate study is easy, so there were struggles. Luckily, I was very curious about the subjects that I studied, which helped learn the information during my studies but also apply aspects of it in my research.

After graduating from Edinburgh University, and receiving the UA award in Chemical and Pharmaceutical Sciences, I went on to do a PhD in Chemical Biology from EPFL, Switzerland. This was a great way to apply both the chemical and biological knowledge I had acquired during my undergraduate studies.

After completing my PhD, I have started a Post-Doc position at Janelia Research Campus, which is part of Howard Hughes Medical Institute in Virginia, USA. Here, I am focused on building molecular tools for applications in neuroscience. Again, I am benefiting from having taken many life sciences courses in my undergraduate.

Have you done something fun?

One of the weirdest things I have done since the Undergraduate Awards is to develop a new kind of protein switch, which were named LAMAs (Ligand Modulated Antibody Fragments. For a whole year, many things that I did were associated with Llamas and Alpacas. Two examples include going on an alpaca hike and meeting Merlin the alpaca and baking Llama muffins. I enjoy baking, so I wonder what the next subject will be!

What do you like the most about what you do?

I love still being in science at the moment. There are several aspects of it that I enjoy. I still get a kick off working at the bench, where you have to constantly problem solve and come up with quick solutions to various challenges. I really enjoy exchanging scientific ideas for a common goal, and to work together to approach a project from different perspectives. I also really enjoy supervising and mentoring future generations of scientists and researchers and being asked questions I had not actually thought about myself.

Winning the Undergraduate Awards has definitely helped me in my path as a scientist. The research work that I performed and wrote up for the UA did not actually give positive data. It would have been very easy for me to write off that research and just say “that didn’t work”.

I knew that the Undergraduate Awards would not solely judge the science in the report I submitted, but also the format and presentation. Therefore, I still went through the steps of analyzing and writing the report thoroughly, which helped me to learn how to write proper scientific literature and helped me for future scientific pieces I have written (this time with positive data). Writing up this negative piece of data also helped give new ideas for how to continue the project, something that I think the scientific community would also benefit from doing every once in a while.

In addition to motivating me by acknowledging the report I wrote, the Undergraduate Awards gave me the opportunity to meet and engage with a range of different people from different backgrounds. I especially liked the challenge of presenting my research to a broad audience from social scientists, historians to life scientists, in only two minutes! This was a great exercise in communication.

I also met several interesting people, which made me challenge certain views and opinions that I had. There were definitely a good mix of people that led to interesting conversations, such as if we would join a Mars-mission? What is peace? How to preserve it? How do you really build the best pasta/spaghetti tower? These are just a few questions that I remember discussing during the UA Global Summit.

Something else that made a lasting impression on me was drinking my first Guinness in Dublin. I have drunk a few Guinness since, but none of them tasted the same as the one I drank in a pub during the summit. Probably down to the company for that first one.

"I definitely encourage everyone out there to submit their work to the Undergraduate Awards! It is a once in a lifetime opportunity to meet people from different backgrounds and engage in interesting discussions and exchange opinions. It is also a great way to have your (hard) work acknowledged."