Meet our 2015 alumna Carolina, AKA Blogger on Pole, Overall Winner for the Media & Journalism category with her research "Journalists’ Twitter coverage of the death of Margaret Thatcher".

Carolina is a third-year PhD student, a visiting lecturer, a blogger, a writer, a pole dance performer and instructor, an activist and a UN #GenerationEquality ambassador. Her research and campaigning focus on fair online moderation that protects vulnerable users and doesn’t censor them.

"It’s a weird blend of fun and random things which have apparently nothing to do with each other, but they are actually quite related."

Where do your interests lie?

I’m currently doing a PhD in what I guess could be defined as cyber-criminology, specializing in conversations featuring online abuse and conspiracy theories on high profile criminal cases.

My research area and the other side of my life – so the blogging and pole dancing – have now come together because, as of 2019, Instagram started censoring women, especially pole dancers, artists, sex educators, sex workers but also the LGBTQIA+ community, people of colour and more communities that really need a voice. So I’ve been using both my research and my platforms to raise awareness of that and to demand better moderation, ideally based on human rights law.

I’m in what I hope is my final year of my PhD. I’m dying to spend more time researching on something else, like algorithm bias, and I’d like to either do a postdoc on it or join a research centre to do it.

Since the award, I moved to Australia to do an MA in Criminology. There I took up pole dancing, which really helped me get my confidence back after the abusive relationship. After a year and a half in Sydney, I moved back to London to start my PhD.

Since then, everything has snowballed.

I re-branded my blog as bloggeronpole.com and I have since been interviewed by the BBC, the Huff Post, Vogue, Metro, etc. I self-published my novel Bad/Tender, which got covered in Cosmopolitan. I won a pole dance competition and competed in other four. I became a pole dance instructor, and I won the Sexual Freedom Award 2019 for Activist of The Year. I spoke at a variety of international conferences, I have a documentary that is being made about me and I’ve recently become a UN #GenerationEquality ambassador.

I am also one of the founders of @everybodyvisible, an anti-censorship campaign launched on 29 October 2019 to raise awareness of Instagram’s silencing of women and other communities. The campaign was supported by my idol and the reason why I started performing – Dita Von Teese. We launched by asking everyone to post a picture either of our logo or of their bodies, tagging the IG and FB chiefs. For a while, their tagged section on Instagram was full of butts!

What are you most proud of?

How was your experience as an undergraduate student?

It was quite challenging at first. My English was very good, but as an Italian doing a journalism degree in London, I had to get used to a completely new style of writing. During my first year, coming from a top-of-the-class high school background, I really had to reset my expectations and I often felt crushed.

By the second year I realized that while journalism was interesting, I was more interested in the academic side of media rather than in the practical one. By the third year, I was already interning in PR and social media management. So I just lost track of who I was.

Now, all of that has become useful towards what I’m doing, but my BA years were all about soul-searching – and for someone like me who anxiously plans everything, not having a plan was hard.

The UA were massively helpful in allowing me to get into my MA. Coming from a journalism background, criminology wasn’t an obvious route, and I hadn’t really done much academically. So having received an award for my undergrad thesis was really important.

For me, submitting to the Undergraduate Awards was life-changing.

When I won, I was stuck: I was suffering from anxiety, depression and PTSD following an abusive relationship, and I was working in PR feeling terribly lost. It just wasn’t my path. When I won the UA I was exposed to a lot of incredible young people who had produced outstanding research, and that inspired me to go back to studying.

What are your dreams for the future?

I’d like to find an agent to represent me both as a performer/speaker and as a writer. Essentially, I’d like to keep doing what I’m doing, but I’d like to do more of it and ideally make it my living.

I also would like to keep researching on algorithm bias and to write a “pop academic” book about it. 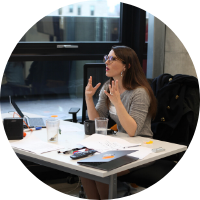 "For me, submitting to the Undergraduate Awards was life-changing. I didn’t think it was going to be, and I didn’t even think my undergraduate dissertation would stand a chance, but my supervisor recommended I did it and I’m so glad she did. If I am where I am now, I own it to that week in Dublin. ﻿"